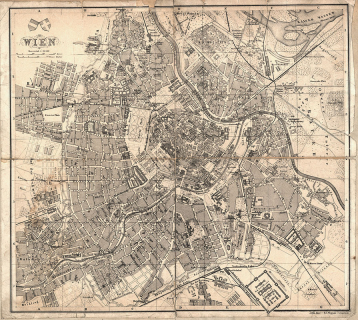 General plan of the area where the Vienna river flows into the Danube Canal, before 1872 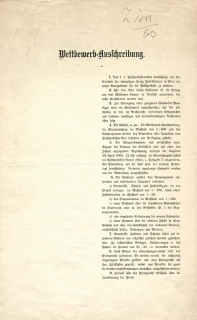 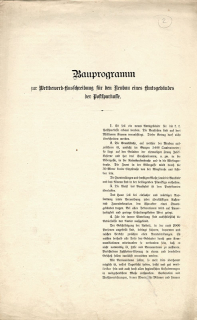 Building program, of the competition for the new building 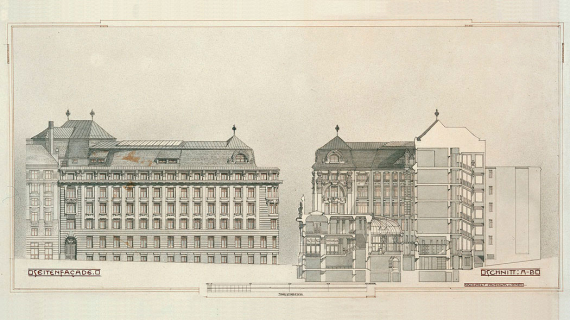 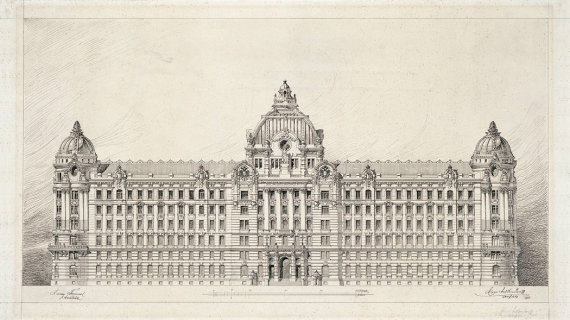 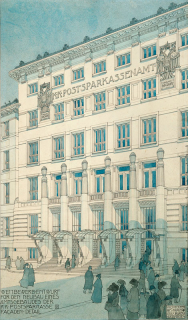 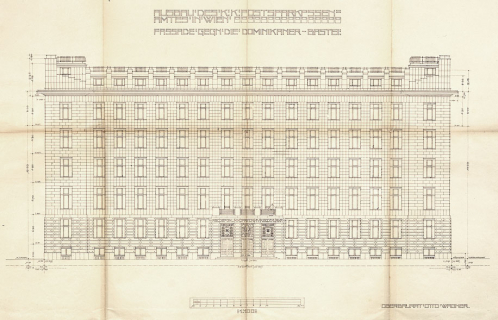 Extension to the PSB, 1910-1912, facade Dominikanerbastei 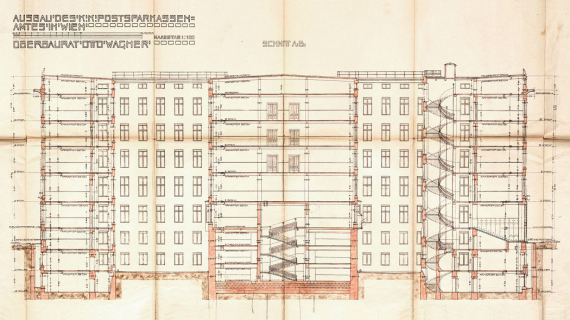 Vienna’s Ringstrasse and the Stubenviertel

The old city center of Vienna remained a fortress until the middle of the 19th century though the city walls had already turned out to be completely useless as a military defense in 1809 when Napoleon occupied the Hofburg after bombarding the Burgbastei. The fortifications also hampered the increasing traffic between the city center and the suburbs.

When Emperor Franz Joseph gave order to build the Ringstrasse in 1857, it had finally become possible to transform Vienna from a medieval city to a modern metropolis. Prestigious cultural and administrative buildings and splendid palaces for the upper echelons of the bourgeoisie lent their character to this boulevard of the monarchy’s capital which was built from 1860 on.

In 1892/93, Otto Wagner participated in the competition for a “general regulation plan” for Vienna and in the competition for the development of the Stubenviertel launched at about the same time. His suggestions served as the basis for the urban development of the area around the Postal Savings Bank. The site Wagner considered for an “Imperial and Royal Post Office” conforms exactly to that of the Postal Savings Bank he built in later years.

The competition for the Imperial and Royal Postal Savings Bank office building was launched as an open and anonymous procedure in February 1903. It took three jury meetings (7 may, 6 june, 10 june) until Wagners submission won out among the 37 entries. According to the protocol, it was above all Otto Wagner’s submission which was discussed by the jury both passionately and in-depth. Contrary to the specifications of the tender, he had combined the halls for the savings business and for check transactions – a solution which some architects among the jury members tried to use as an argument for rejecting Wagner’s project but which was recognized as a functional improvement not considered before by the representatives of the Postal Savings Bank. The competition was remarkable for three reasons: not only did the jury take three not subsequent days for evaluating the projects, its members also examined the projects individually between the meetings; last, not least, the priority given to functional and constructive criteria over stylistic evaluations clearly evidences that modernity is gaining ground.

The projects entered in the competition for the Postal Savings Bank clearly reveal the conflict of the period around 1900 to do justice to the new functional necessities in the guise of the stylistic variations of historicism.
Theodor Bach’s design was an attempt to apply the formal vocabulary of the Renaissance to the appearance of the new structure. The design by Professor Max Freiherr von Ferstel, son of the architect Heinrich von Ferstel, who built the Votivkirche, the University of Vienna, and the Museum of Art and Industry, was described as a richly structured mansarded palace in a quasi-Renaissance style. The contribution by Franz Freiherr von Krauß and Josef Tölk, with its allusions to the “early Empire style” and its modernist approaches, is stylistically most closely related to Otto Wagner’s design.

Otto Wagner’s contribution to the competition

Otto Wagner’s project was certainly the most carefully worked-out of all suggestions submitted to the jury of the competition. He was the only participant able to combine the vision of a new Postal Savings Bank with that of a new, modern architecture. It is an extremely rare event in the history of architecture to see a visionary task coincide with visionary architecture and client and architecture pursue the same contents and objectives.

The prize-winning design had included a large glazed roof above the central part of the building which was to protect the glazed roof of the banking hall below from atmospheric influences. Despite Wagner’s protests, this large roof was not built in order to reduce expenses. double-shell glazed roof directly above the banking hall instead. This entailed a change of the entrance front of the central building: the originally planned attic areas were realized in a less prominent form and emphasized by 4,5-meter high aluminum acroteria.

The building has eight stories. It is built of brick and has reinforced concrete floors. The partition walls are non-load-bearing so that the spaces between them can be easily altered. Otto Wagner expounded on the expediency and sustainability of all elements of the construction. Everything was to be not expensive, durable, and easy to maintain, was to improve the functionality and guarantee a hygienic working environment.

The second construction stage was realized only four years after the opening of the Postal Savings Bank. The completion of the lay-out had already been part of the urban development plan for the reorganization of the Stubenviertel, but was mentioned neither in the competition design nor in the descriptions concerning the realization of the first stage.

By not changing his basic concept and developing a consistent extension, Wagner proved the quality of his structural, constructive and organizational approach. A vertical joint in the façade clearly distinguishes the added building, the structure of which Wagner radically simplified with the cladding he chose. His even more functional solution for this part of the building becomes also visible in the alignment of the basement.

Though the addition is clearly recognizable in its architectural features, it does not bring about a break of the overall impression. Wagner’s solution is an unmistakable declaration that architecture can and must proceed both technically and formally without ignoring existing structures. Present-day visitors will see the first and the second construction stages as a harmonious whole; the difference between the two will only reveal itself to meticulous viewers.

As revolutionary Otto Wagner’s position and vision may have been against the background of his time, as evolutionary was the move with which he conducted the inhabitants of Vienna into the future of architecture with his extension of the Postal Savings Bank. The added structure may be regarded as a perfect example of the possibilities inherent in the careful and thoroughdevelopment of an existing building which is still worth considering today.