The Austrian Postal Savings Bank and the architect Otto Wagne 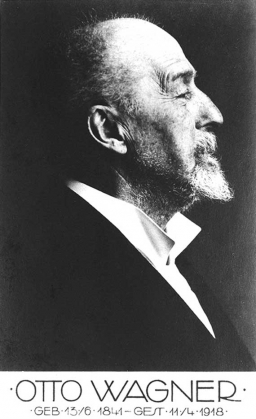 Otto Wagner was born the son of a notary to the Royal Hungarian Court on 13 July 1841, who died only five years after the child’s birth. So it was the mother who wielded a decisive influence on her son in the following decades: coming from a well-to-do bourgeois background, she wanted to see him trained as a lawyer. Yet, after having completed his basic humanistic education at the age of sixteen, the young man began to study at the Polytechnic Institute in Vienna. It was Theophil Hansen on whose recommendation Wagner was able to proceed to the Königliche Bauakademie in Berlin. Yet, in 1861, at the age of twenty, Wagner already returned to Vienna where he completed his studies at the Academy of Fine Arts just one year later where he had found two teachers he greatly respected: von Sicardsburg and van der Nüll. After leaving the Academy, he worked in the studio of Ludwig von Förster, the Ringstrasse architect, where he was given an executive function from the start.

At his mother’s urgent request, Wagner married Josefine Domhart in 1863. In the following years, he became a successful Gruenderzeit architect. He built apartment houses, which he planned, financed, used, and sold, as well as villas and participated in a number of competitions. Shortly after his mother’s death in 1880, he escaped from the “moral prison” of his first marriage by divorcing his wife. He married Louise Stiffel whom he adored and almost idolized beyond her death in 1915.

In 1890, Wagner self-published the first volume of “Einige Skizzen, Projekte und ausgeführte Bauwerke” (‘Some Drafts, Projects, and Executed Buildings’). This and the further volumes issued in 1897, 1906, and 1922 respectively already documented the architect’s most important works during his time. Otto Wagner was increasingly fascinated by the new developments in science and technology. In 1883, he received one of the two first prizes in the competition for the new “general regulation plan” for Vienna. The motto he had adopted for this project, Gottfried Semper’s “Artis sola domina necessitas,” should remain crucial for him throughout his life. On the suggestion of the Künstlerhaus, he subsequently became an adviser to the Viennese Transport Commission and the Commission for the Regulation of the Danube Canal in matters of art. This led to his landmark Stadtbahn and Donaukanal designs and buildings.

In 1894, Wagner was appointed full professor and director of a special school of architecture at the Academy of Fine Arts Vienna. He published the revolutionary principles of his approach for the first time in his book “Moderne Architektur” (“Modern Architecture”) in 1896. The fourth and last reprint published during his lifetime in 1914 was already titled “Die Baukunst unserer Zeit” (“Architecture Today”). The visionary projects of the “Wagner school” became legendary, and a number of important architects such as Rudolph M. Schindler, Jan Kotéra, Jože Plečnik, Josef Hoffmann, and Ernst Lichtblau were to be found within its ranks. When Otto Wagner retired from the Academy in 1912, his successor was rejected by his students. So Wagner went on teaching them in rented classrooms.

Otto Wagner’s main works date from around 1900: the Postal Savings Banks and the Steinhof Church. The vigorous attacks launched by conservative groups are to be primarily attributed to these successes. Many of his further designs such as that for the Emperor Francis Joseph Municipal Museum, the Technological Museum of Trade and Industry, a new Academy of Fine Arts, the Ministry of War, and the Ministry of Trade were not realized.

In the last years of World War I, Wagner designed hospitals, soldiers’ barracks, and interim churches. He died on 11 April 1918.