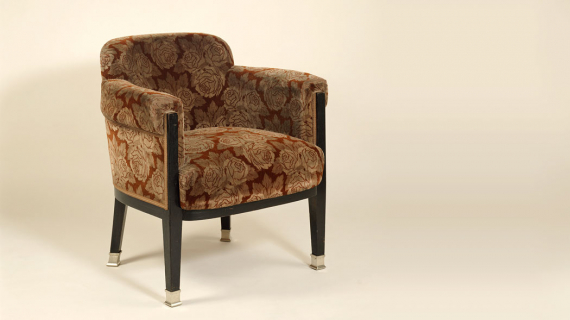 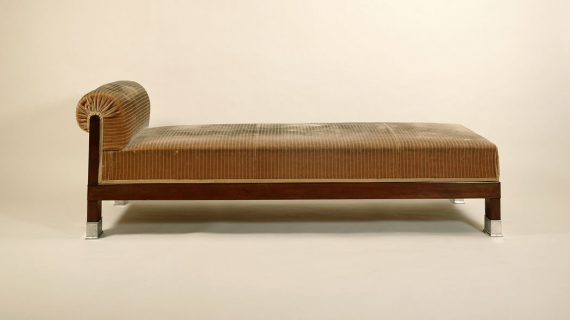 Divan from a department head's office 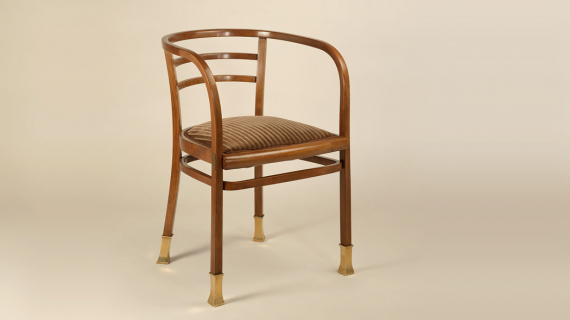 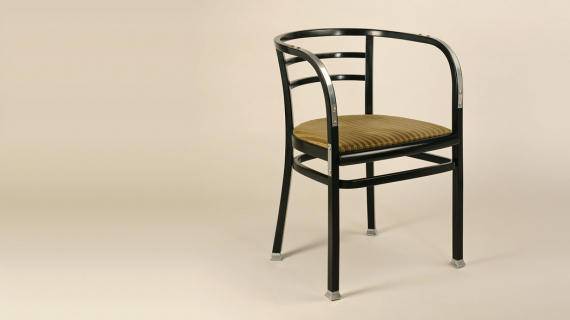 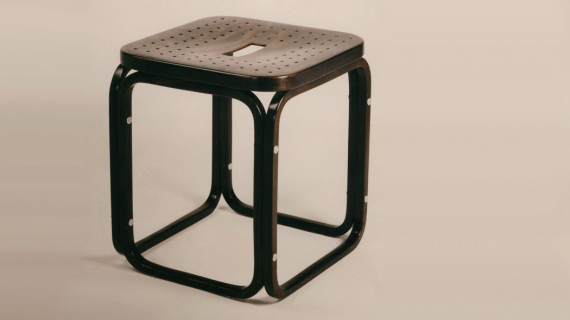 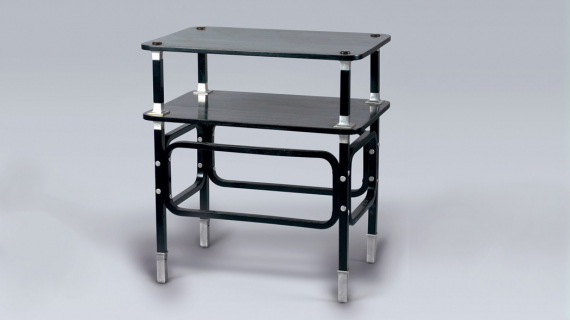 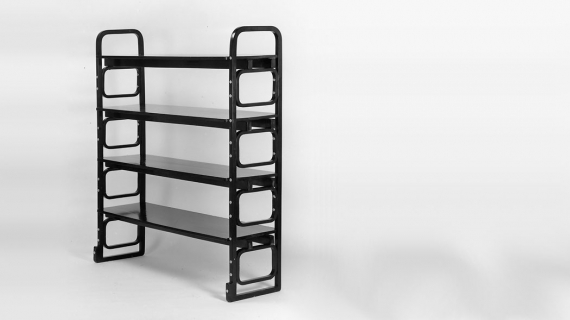 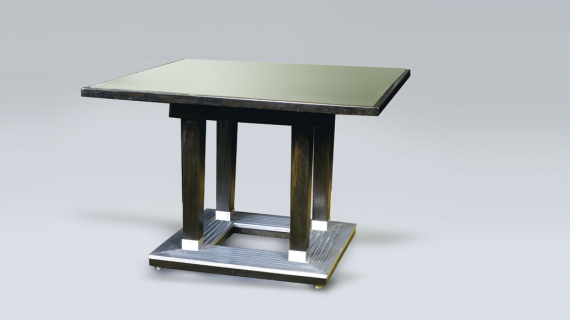 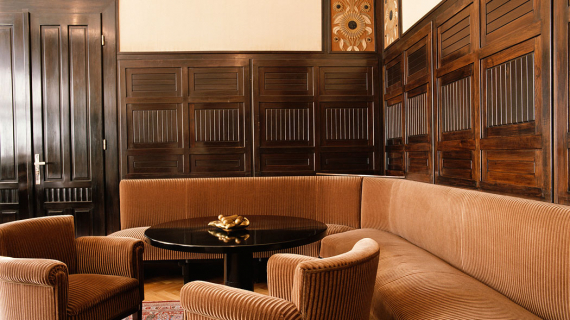 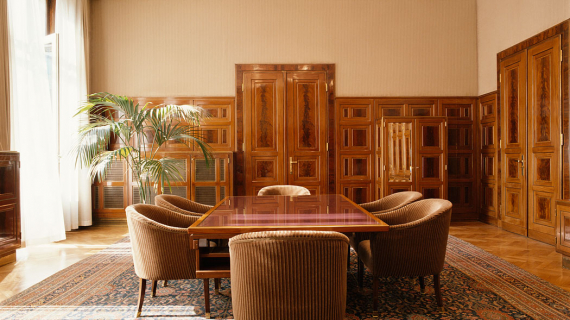 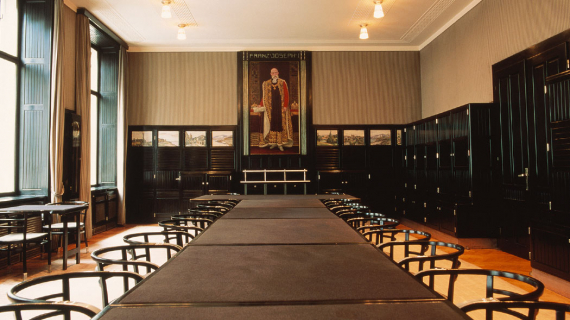 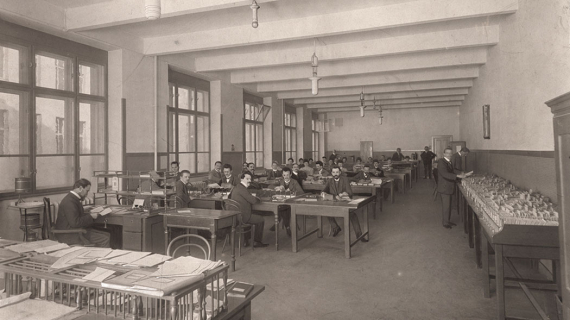 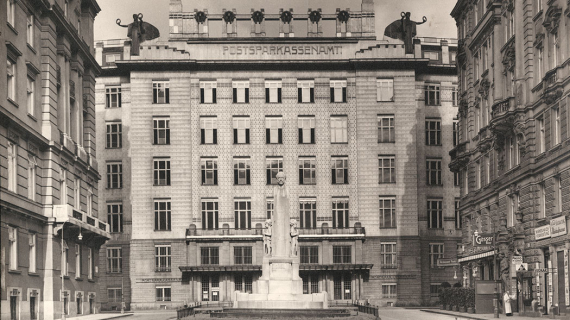 Main facade as seen from the Ring 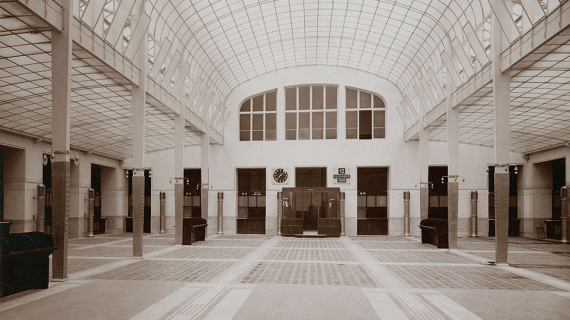 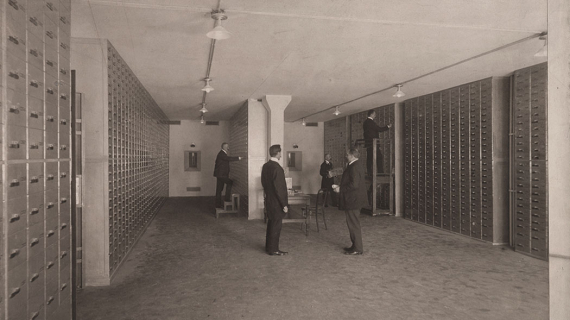 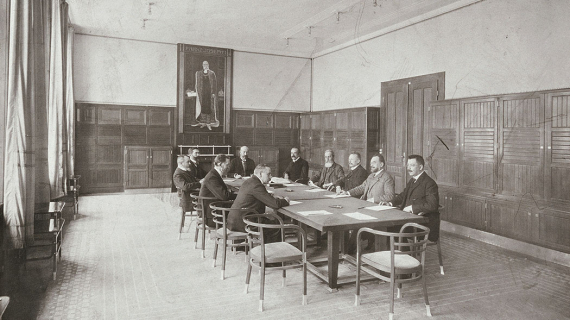 Otto Wagner expanded the traditional understanding of what an architect’s profession comprised. He designed the entire decoration and furnishings of the Postal Savings Bank: floor coverings, wall panelings, carpets and rugs, radiators, lamps, clocks, door handles, standing desks, counters, stools, seats, chairs, desks, wardrobes, wall racks, safes – everything had to comply with his ideas. On account of his cost-awareness, he aimed at maximum durability when choosing between certain materials or modes of construction. Apart from that, Otto Wagner used materials for defining hierarchical structures. He had to furnish three different areas: that of general business, the representational rooms of the management, and the internal operations quarters. The different designs of the Thonet armchair model no. 6516 are probably the best example for illustrating Wagner’s approach.
The armchair for the management area was made of mahogany-stained solid beech, its seat upholstered in velvet, the high sleeves for the feet were executed in brass. On the level below, we come upon the same model, yet stained in grey and with armrests and feet furnished with aluminum fittings and sleeves. Protecting the armchair against wear, these details also emphasize the value of the piece and its character as an object of art. The simplest variant used in the small offices had a seat of perforated plywood.
Otto Wagner’s stool for the Postal Savings Bank used in the Large Banking Hall certainly numbers among the highlights within the history of Viennese furniture. Consisting of five separate bentwood frames and having a perforated plywood seat, the stool was based on a simple construction and not expensive to manufacture (10.50 crowns). The drill holes were covered with aluminum disks, which emphasize the construction and serve as ornamental elements that relate to the scheme of materials chosen for the building.

The color scheme of the second floor – white, grey, black, silver – is only interrupted in the representational rooms where red (director’s office) and green (reception areas) prevail.
All rooms are covered with a 2.2-meter high wainscoting, the walls above it with striped textile wallpapers in the color of the room. Carpets manufactured by the Johann Backhausen company after designs by Otto Wagner covered the parquet floors.
The original grey carpet in the Large Meeting Hall with its impressive measurements of 11.1 x 5.5 meters has survived.

In his work “Moderne Architektur” (“Modern Architecture”), written in 1895, Wagner expounds on the advantages of façade claddings compared to the traditional method of building with “stone layers” and “stone blocks,” which, according to him, resembles the “construction method of the Ancient Romans”. The stone and marble slabs for the façade of the Postal Savings Banks had to be fixed chiefly on account of the the speed at which the work had to progress. The measures called for 17,000 nails, which were made of iron, clad with lead, and coated with aluminum.

Otto Wagner relied on the most modern technical solutions for the construction and the interior finishing of the building. The even street façades are entirely clad with granite and marble. The large central courtyard above the Banking Hall is tiled in white. The rooms, corridors, and staircases used by the public are covered with marble and glass. All office localities are simply painted white, only the lower parts of the walls are protected by strips of wood and darker wallpapers.

The construction of the ceilings is a bold and new solution: a layer of asphalt was spread directly on the concrete ceiling, and the oak floor boards were stuck onto the still soft material. Regarding his choice of linoleum as floor covering, Wagner emphasizes that it is easy to replace and had it fixed in sunk settings of “granitto,” a terrazzo variant, to prevent tripping.

Having a glazed prism floor installed in the Banking Hall to light the rooms below was almost the obvious solution for Wagner. In its description, he not only refers to the example of the Imperial and Royal Private Austrian Länderbank planned by him but also to French bank buildings “where glazed floors are successfully used even through two stories.”